This was an assignment from hell. However, it was fun.

I am not proud of this model. My first models were all failures, I think I made about 4 or 5 before this one, all needing to be scrapped. And this one is rushed due to the deadline.

I found this assignment to be extremely challenging. I find Maya to be terrifying. I am not skilled in it. So being faced with this daunting task is why I did so many models. I would panic, and then not be able to work out what went wrong and end up having to restart.

After the failed attempts at mudbox, I turned to Maya, having become familar with the polygon based modelling system. I then bought an extended version of this tutorial after several more modelling failures:

I did very well with the actual face. I am very proud of the face as I spent a long time cutting the polygons, trying to keep a simple typology for animation purposes. I also think it looks a lot like Molly. I had her reference photos open on two image planes on Maya.

As stressful as I found this task I am excited to revisit it during summer without the pressure of a deadline. Is trive for perfection in everything I do and for a head model that was made (ashamedly) rather quickly I am pleased with it.

I used this tutorial for the retopology:

I’m going to be honest, I had no idea what I was doing with re-topology. My re-topology is very messy, espceially on the right side of the face. I got so conufsed that I had to restart the topology several times, but alas I could not get the ears perfected. Unfortunatley, I had to let it be as I couldn’t finish the right ear.

Topology is definitely something I’ll have to reserach over summer and I’m extremely disappointed with the outcome I have produced. I do not feel that I fully understood the purpose of topology as I brushed it under the rug in favour of the model. Which I am extremely diappointed in myself for doing. 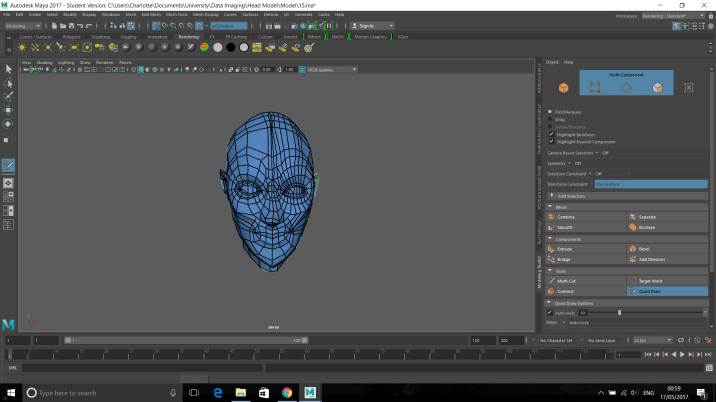 However, overall I feel that I have learnt a lot, and its really motivated me to push myself over summer so that I can prove to myself that I can do an assignment like this.

This is a text widget, which allows you to add text or HTML to your sidebar. You can use them to display text, links, images, HTML, or a combination of these. Edit them in the Widget section of the Customizer.
%d bloggers like this: